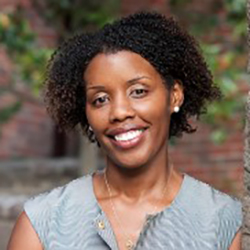 Professor Aysha Ames is a proud and enthusiastic Brooklynite. She lives in a trendy walk-up just ten minutes away from Brooklyn Law School where she teaches legal re-search and writing. She fearlessly cruises through the NYC streets on a Revel Scooter, and having just obtained her motorcycle license, she plans to purchase a Vespa in the near future to traverse the city or even occasionally escape it.

When she’s not teaching, writing, or zipping through the streets, you might find her destressing through an at-home session of Baptiste hot yoga, which she is certified to teach, or Zooming with anxious clients of Yogalese, LLC—the “yoga law” consulting firm she founded in 2016, which advises yoga studios nation-wide on wide-ranging issues from tax to torts.

But Ames wasn’t always a street-savvy city yoganista. Indeed, her childhood home could not have been more far removed from the hustle and bustle of New York’s concrete jungle. Instead, she came of age in the tiny “oyster town” of Port Norris, New Jersey, which is situated on the Delaware coast at the mouth of the Maurice River. Home to less than 1400 people, Port Norris was the kind of slow and sleepy township where stop lights and locked doors are deemed unnecessary and where all too many dreams go unrealized.

Once reliant on seafood for its livelihood, Port Norris residents—most of whom have lived there for generations—possess an unusual appreciation for and connection to nature, especially the water. Still today, Ames feels that distinct pull. A green thumb who has recently explored floral design, she grows a vegetable and herb garden on her terrace and volunteers at a community farm in Brooklyn that pro-vides fresh vegetables to low-income people.

Growing up in Port Norris didn’t just foster a spirit of stewardship and self-reliance in Ames, but it also instilled the importance of faith and family. Ames descends from a man who had been enslaved by Jesuit priests at Georgetown College but escaped before he could be sold to a southern plantation. His incredible story of survival was almost lost to history.

His direct descendant—Ames’ paternal grandmother—was one of eight sisters who had some-how convinced their accommodating husbands to build homes side by side along a single street in the middle of Port Norris. Ames and her younger brother grew up just around the corner surrounded by a close-knit, loving, and involved group of aunts, uncles, and cousins. Still today, the influence of these strong and intelligent matriarchs and their unwavering Christian faith have shaped who Ames is and how she approaches life.

But it was Ames’ mother who was perhaps the most influential matriarch of all. Mrs. Ames was a courageous “influencer” long before that term came in vogue. Dedicated to achieving racial justice and equality, she worked for an impactful literacy initiative established by Coretta Scott King. It aimed to help students hone their literacy skills, provide opportunities to meaningfully explore African-American history and culture, and to honor the lasting legacy of King’s late husband, Dr. Martin Luther King, Jr. As part of this noble and important work, Mrs. Ames helped integrate a formerly all-white school. But she was not the only civil rights crusader in her household. Her husband, Mr. Ames, was also an activist for racial equality and justice, organizing marches and movements throughout his life. The Ames’ commitment to civil rights irrevocably impacted their daughter, planting the seed for her future career as a civil rights attorney and legal educator.

Yet even as a little girl, Ames knew that Port Norris was simply too small for her big dreams. Despite being surrounded by a network of extended family and enjoying ample time for introspection, small town life sometimes still felt lonely, stifling, and isolating.

So, at 18, Ames left home and attained her Bachelor’s Degree and a Master’s in Education from Rutgers University. Perhaps influenced by her mother’s long-time involvement in education, Ames became an elementary school math teacher. She learned valuable lessons about student engagement and pedagogy that she still applies today, and as an added bonus, befriended a colleague who, to this day, remains one of her closest friends, confidantes, and cheerleaders. Although Ames enjoyed teaching, she had considered law school and finally took the plunge. She returned to her alma mater Rutgers to attain her law degree. While there, she was taught, inspired, and changed by LWI icon Ruth Anne Robbins.

The love of learning, respect for others, and desire to achieve racial equality fostered by her parents, faith, and family prompted Ames to apply for a position at the Department of Education’s Office for Civil Rights (OCR) in Philadelphia, where her younger brother and beloved four-year-old niece still reside. OCR’s mission is to “ensure equal access to education and to promote educational excellence throughout the nation through vigorous enforcement of civil rights.” At OCR, Ames strived to give marginalized and underrepresented people a voice. During that enriching, albeit emotionally difficult, experience, she learned that at base, people all want the same thing—to feel respected and heard. This all-important lesson still shapes how she interacts with colleagues and students. As a result, she creates an inclusive learning environment by developing close relationships with students, listening to them, and understanding the importance of how she makes them feel. She also weaves anti-racism, diversity, and inclusion initiatives into her classes year-round.

Although her work at OCR was fulfilling, Ames is a person who unabashedly “lives in the moment.” An entrepreneurial and curious spirit, she is unafraid to try new things or take a leap of faith. So, when Brooklyn Law School posted a vacancy, she jumped at the chance. A few months later, she found herself searching unsuccessfully for affordable housing in the highly sought-after neighborhood of Brooklyn Heights. But with the easy optimism and faith in others that has be-come her signature, she leased an apartment from a total stranger sight unseen based on little more than his assertion that the apartment would be unavailable the next day unless she “Venmoed” him $500 that night. A risk-taker whose long shots have usually paid off, she rolled the dice, sent the money, and a few days later, found herself moving into a fabulous space that was the only newly renovated apartment in the entire building!

And those same qualities of mindfulness, risk-taking, and adaptability have served her well in 2020. Ames had less than a year of law teaching under her belt before the pandemic forced her to pivot to teaching online. But Ames has found the COVID-related course interruption “invigorating,” in part because it has deepened her “profound respect” for and commitment to students completing their degrees during this strange and stressful time.

Having successfully transitioned from small-town girl to savvy Brooklynite while still preserving a strong sense of self, Ames doesn’t yet know what the future holds, except that it promises many exciting chances that she won’t be afraid to take.

You can reach Aysha at aysha.ames@brooklaw.edu and visit her faculty profile at https://www.brooklaw.edu/Contact-Us/Ames-Aysha.